Today, we will be making some DELICIOUS dessert pizza! In this deep-dish dessert, there are sweet and savory flavors of chocolate and strawberry! 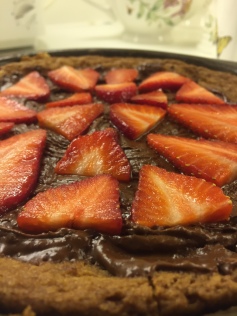 When I told my brother that I was making pizza for dessert, he was bewildered by the thought of pizza as dessert. After World War II, America’s craze for pizza sky-rocketed. People saw it as a fun way to have fast-food. Different regions began to add their own ingredients to pizza, and soon the dessert pizza was born from other’s creativity.

Pizza consumption has been on the rise in America with $38 billion in sales every year! In that mix of sales are dessert pizzas, which has been bringing pizza chain restaurants a larger revenue than pizzerias that do not offer the dessert option. When dessert pizzas were first being introduced to pizza chains in 2009, there was a 45% increase in pizza sales than previous years. I don’t think you knead to spend anymore dough on pre-made pizza, when you can make it at home!

Dessert pizzas are an easy and fun way to end a meal. This recipe is a great twist on the idea of a pizza. Instead of a normal flour and yeast pizza crust, we will be making a sugar cookie crust. Then it will be topped with a rich chocolate icing as the sauce and strawberries as the final touch.

The “crust” will need the following ingredients…

And finally, the only “topping” you’ll need is strawberries!

To begin the pizza, you need to start at the first layer– the sugar-cookie-crust!

While the cookie is baking, you can start making the frosting.

When both the cookie and frosting are done cooling, evenly distribute the frosting along 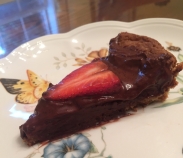 the center of the cookie-crust. Then chop clean strawberries, into thin pieces to put on top of the “sauce”.

This dessert pizza is a quick, but fun dessert and can be eaten by up to eight people! It can be elegantly served for a dinner party, or for a family game night!

View all posts by madiw20

One thought on “Cookie-Crusted Dessert Pizza”